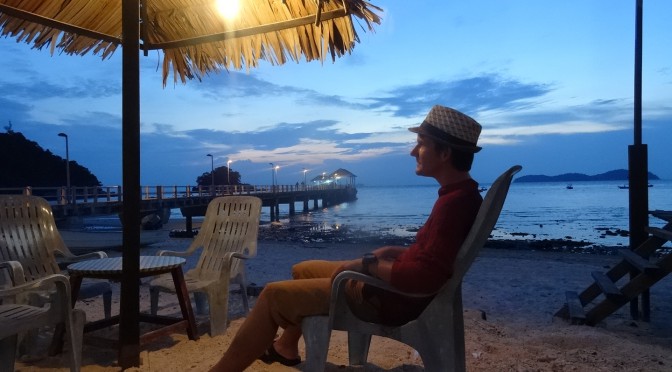 Hello World to the country of

Tallest twin tower in the world

The border crossing from Thailand was just great. Only me and Buraham Freedom, a Malay, who did not speak much English crossed the border in Padang Besar, and no further buses are available there. So he showed me how to cross the border (it was the first time I crossed a border by a Motorbike-taxi) and then we were waiting for a car of a family member of him maybe 5 minutes. He brought me to his restaurant and invited me for dinner. I’ve never got invited so fast after crossing a border! 🙂
Finally he brought me as well to a hotel in the next big city Kangar. What nice people!

Next day I arrived in Paneng, George Town, and right by the check in I met Angi, as well from Switzerland. We had together a really nice time. So we ate good Indian food, went to the monkey beach and had a lot of parties together. I have to thank you, Angi! I was very impressed about the nice street arts.

Kuala Lumpur was formally only a must to do thing, because I applied for the Indonesia Visa…. But it was unsuccessfully, because the invitation letter I have from my brother should be written from his wife… For some reason I still don’t understand. So I lost just a Morning waiting in the embassy, but in the afternoon I could visit some friends, who I met travelling in south Korea. For that I had still a Nice time.

After 3 nights of KL I had enough and headed to Malakka, where I met Stu in the Busstation, and we decided to
Take together a room. The two Nights and Days we spend in Malakka were also amazing. We discovered the main tourist sites by bicycle and went to the Reggae on the river Bar by foot. That was for sure not the worst Idea. B-)

For recovering my health, I spent some days in Tioman Island with snorkeling, boat tour and NOT smoking NOR drinking alcohol. I saw some Sharks, a manta, an Eal and a very big Octopus, but I figured out later, that it was a huge fishing net. I was just shocked after i saw it and went quick back to the beach without taking a second and closer look. B-)

In Singapore I visited first Angela, who I met as well travelling in south Korea. Thanks a lot for showing me around, the Neighborhoods and how to eat durian Angela! It was very interesting!

The third try of applying for an Indonesian Visa was disappointing as well, because I couldn’t get into the embassy at all; I had no long pants and no ID- card with me… On her webpage I didn’t read anything about this, so I lost another day. But next Morning I was successful and quick enough to save the time in hanging out in the pool of the superlative Hotel Marina bay sands, where, my friends from Switzerland, Jan and his wife Doreen, have booked one Night. The next 2 Days we spent together by visiting the Museum and the Zoo. Thanks for sharing the time together, Doreen and Jan, it was fun!