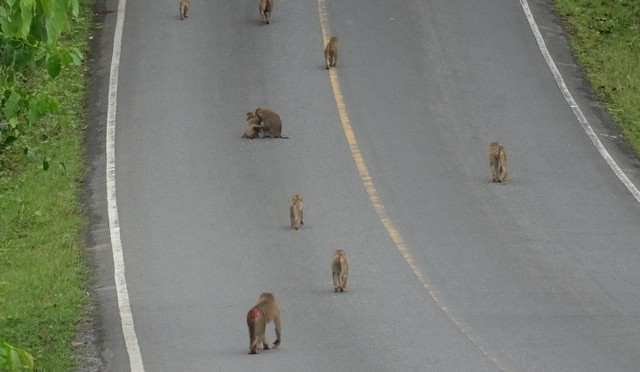 The border crossing from Myanmar wasn’t that easy, but very interesting. In Myanmar was only a dirt road to the border, but they are building now a big street for a cargo connection from Bangkok to the sea of Myanmar. Directly after the border in Thailand we got on a highway, it was a little bit curious. After a while of searching a transport to Kanchanaburi, we decided to hitchhike. Chris got bad luck and gave up after trying of 10 minutes. I finished my lunch and went to a pickup nearby, and they took us in nearby 1 hour to our hotel. If I had asked Chris about this situation, he didn’t said any word.

Kanchanaburi is famous for his bridge over the river Kwai, as the start of the infamous World War 2 Death Railway to Myanmar, where 100’000 of 200’000 prisoners were killed by building this railway. After finishing the connection of 415km from Bangkok to Rangoon in record time of 16 month, it was in use for 23 month.

We rent a motorbike and went to the hellfire pass, which was probably the worst part in the history of this railway.


But on the way we were surrounded by a beautiful landscape.

Then we took the train to Bangkok, I think most people know this city. For that I don’t have to explain anything about that… Chris and I met some friends and had to say goodbye, because he went to Indonesia by flying, and I want to spend more time in this region, before heading south.

I decided to make some stops on the way to Cambodia, and the first was in Pak Chong, near the national park KhaoYai, the oldest in Thailand. Because it was ending the high season, I got a guide for my own, which is better for watching animals in compare to a group.

In Nakhon Ratchasima, the second biggest city in Thailand, I made only a short stop for print out my e-Visa (it was challenging to find a place for that!) for Cambodia, visiting some Wats and the night market. When I was walking trough the town and next day to the bus station, I had to laugh about the planner of this city. A lot of streets are not connected to others nearby, so I had to make often a big detour to reach my destination…

In Aranyaprathet I arrived late so I had to spend a night there, and found a bar with live rock-pop-rap-music, and I was not long time alone…